“It’s all about the frequency, most of us know this. Splitting water for fuel is the same way. Our water spark plug kit is much like adding a high end, after market stereo system to your car. But, instead of a few thousand dollars spent on frequencies sent to speakers, we send amplified resonant frequencies to spark plugs primed with water that just turned water into fog. When this fine water mist is hit with a special frequency Tesla spoke of, one can disassociate water molecules into a gaseous state of HHO. That is two hydrogen atoms and one Oxygen atom per water molecule. Hydrogen from water is bonded to ionized Nitrogen from the air intake making NH3 fuel to equal that of a gasoline ignition before being dispersed for ignition. New laser technology has proven to be more efficient than traditional plasma arc ignition, we want to make a laser fired hydrogen gas injector fuel cell, otherwise known as a Water Spark Plug. Please share this pic if you want to see this technology brought to fruition.. ” Daniel Green

“Gasoline and diesel fuel internal combustion engines can be converted to run on ammonia.  The first utilization of liquid anhydrous ammonia as a fuel for motor-buses took place in Belgium during the year 1943. The motor-bus fleet logged thousands of miles during WWII with no difficulties.” http://www.agmrc.org/renewable-energy/renewable-energy/ammonia-as-a-transportation-fuel/

“With unlimited nitrogen in the air, and unlimited water, you could turn it into a global technology” 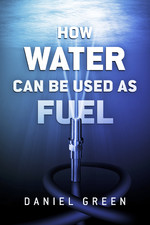 How water can fuel gasoline engines and why we must start using the technology. Free abundant clean energy is available in the form of water.